The memorial features a part of the ballot for the election of the Greater German Reichstag and for the Referendum on the Reunification of Austria with the German Reich on the 10th of April 1938. It points to the danger of undermining democratic principles in a society. The memorial was created on the initiative of the WasserCluster Lunz in cooperation with the Department of Arts and Culture / Public Art of the State of Lower Austria and the market town of Lunz am See. The work is by the artist Florian Pumhösl, whose design was selected for realization in the course of a competition.

The referendum on the annexation of Austria by the German Reich was neither open nor secret, and it excluded around eight percent of Austrian voters, such as Jewish citizens, from participation due to the racist provisions of the Nazi state. The referendum was passed with a 99.7 percent approval rate in Austria and a very high turnout. Only a few citizens conspicuously voted against it. This often had immediate consequences, for example for Wilhelm Mathes from Lunz. Due to his vote, Mathes was arrested by the police, who were accompanied by local Nazis. On the way from his home to the police station in Lunz, he was viciously insulted and threatened by local residents who chanted calls for his deportation to the Dachau concentration camp.

Original quote from Wilhelm Mathes on the consequences of his “no” vote: “I stepped out of the vehicle and saw that a well-organized line of people was waiting for me. In front stood the little Hitler Youth boys and behind them the adults. I had hardly left the vehicle when the shouting started. [...] While I was being interrogated, a large crowd stood outside the police station roaring chants of ‘Off to Dachau with him!’, ‘Surrender him to the people’s justice!’, and ‘Traitor of the people!’ The crowd grew wilder and wilder, a window was smashed, and then the police closed the shutters, after which the people pounded on them and continued to shout chants.”

Statement of Wilhelm Mathes before the People’s Court, 1946. 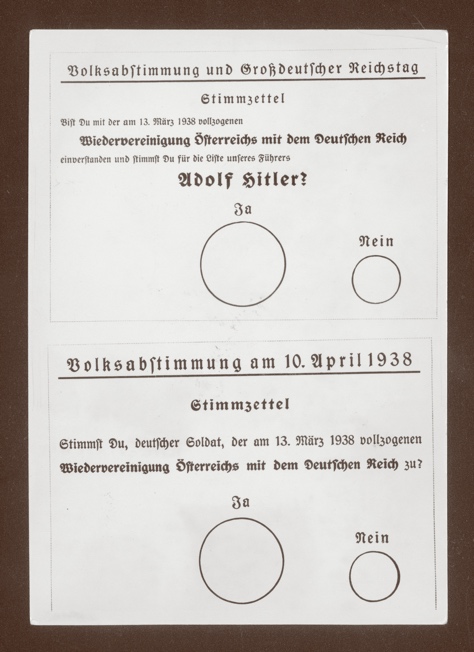 Facsimile of the ballot for the Greater German Reichstag election and the Referendum on the Reunification of Austria with the German Reich, April 10, 1938.

Documentation Archive of the Austrian Resistance. 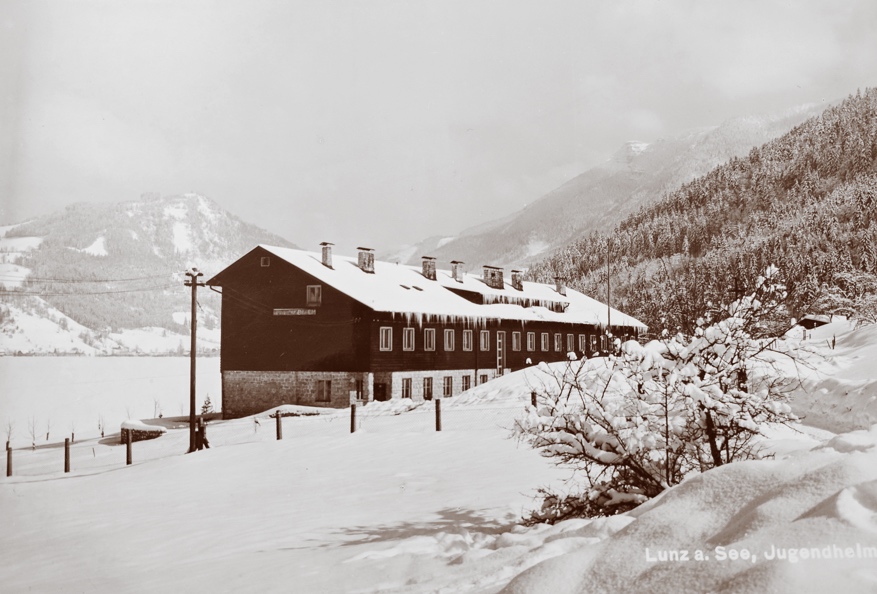 From 1940 to the end of the war, members of German minority groups from South and South-Eastern Europe (“ethnic German resettlers”) were housed in this building, which was constructed in the late 1930s as a district youth center and was expanded in the 1970s to house today’s WasserCluster. During the war, the building also regularly served as a military training camp and as the director’s office of the Lunz Hitler Youth camps.

Exclusion, persecution, and violence during the Nazi period

In June 1938, Salomon Neuner and Karl Fallmann, both born in Lunz, were deported to the Dachau concentration camp. Neuner belonged to the only Jewish family living in Lunz and later died on the 16th of December 1938 at the Buchenwald concentration camp. Fallmann was classified under the SS category “police preventive detention” and was transferred on the 8th of August 1938 with the first transport from Dachau to the Mauthausen concentration camp, where he committed suicide on the 3rd of February 1939. The other members of Neuner’s family, Hermine, Friedrich and Ferdinand Felix, were expelled from Lunz and deported to Maly Trostinets in May 1942, where they were murdered. Throughout the war in Lunz, there were repeated acts of violence against forced laborers and several cases of denunciation among the local population for so-called “treachery and subversion of national defense.”

Until the end of the 1930s, the site of today’s WasserCluster was occupied by the Seereith farmhouse, which was used as a youth center. A new district youth center was then built here, and from the summer of 1940 on it served, among other things, as the organization office of the defense training camp for Lunz’s Hitler Youth. In the autumn of 1944, Lieutenant Ernst Burian from the Wehrmacht took over as director of the Lunz Hitler Youth camps, which could accommodate up to 500 young people at several locations. The 14 to 18-year-old boys were trained in military field and target practice for four to six weeks, while attending lectures indoctrinating them politically and ideologically in the Nazi worldview. The defense training camps in the Lower Danube District (today’s Lower Austria) were under the direction of the Hitler Youth district leader Josef Kracker-Semler, who had withdrawn to Lunz from Vienna in May 1945. Both Burian and Kracker-Semler were involved in massive crimes in the greater Lunz am See area toward the end of the war. 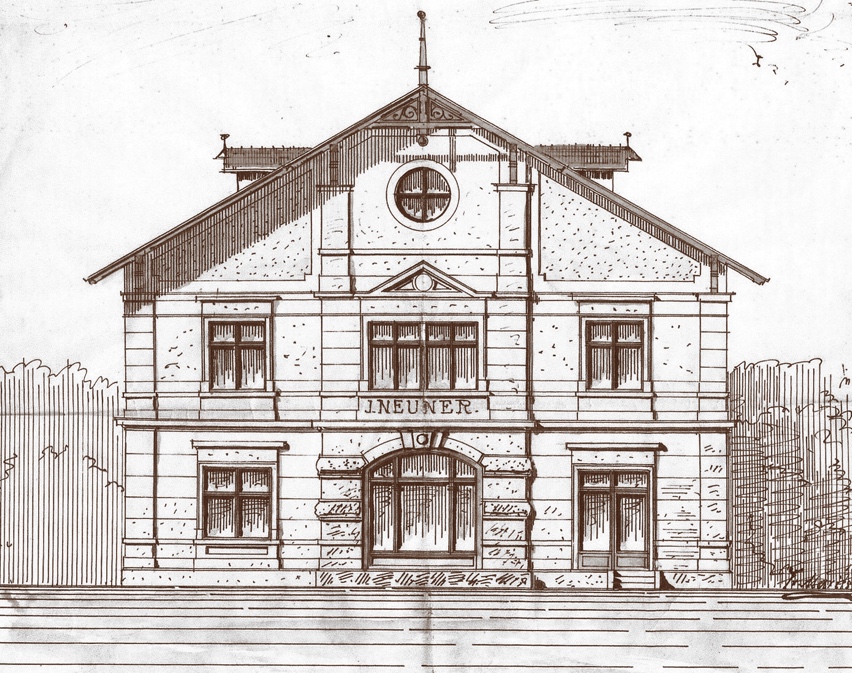 The expulsion of the Neuner family and the “Aryanisation” of their house is also documented in the Lunz police chronicle: “The only Jewish family living here, the Neuners, had to leave Lunz am See. The house and garden was acquired by the Sparkasse Waidhofen an der Ybbs and become a branch of their business.” Lunz am See police chronicle, 10 April 1940 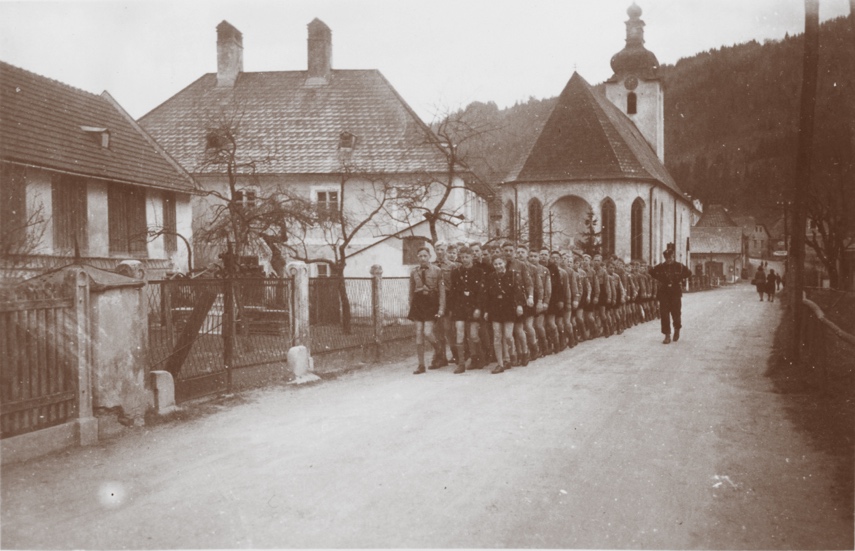 The photo shows boys from one of the Lunz camps housing evacuated children in front of the parish church. The 4th grade of the Johanneum boys’ secondary school in Lübeck was quartered in the Grubmayr Inn in Lunz am See for six months in 1943. The evacuation programme was designed to accommodate pupils between the ages of ten and fourteen from German cities threatened by air raids in less endangered regions. As in the Hitler Youth Camps, the children in these evacuation camps were systematically indoctrinated in the ideology of the Nazi regime.

Lunz am See as a place to withdraw

Lunz am See was of great importance to the Nazi regime, not only as a location for Hitler Youth camps, but also for the extended evacuation of children to the countryside. In addition, the German Wehrmacht carried out cold tests with military vehicles in the Gstettneralm (Grünloch) sinkhole nearby. Finally, due to its geographical location, Lunz am See was used as a place for military forces to retreat from the advancing Allied troops in the final phase of the war. These forces included units of the Waffen-SS, who committed three massacres in the district of Scheibbs between the 13th and 19th of April 1945.

Two hundred Hungarian-Jewish forced laborers were murdered in the towns of Göstling an der Ybbs, Randegg, and Gresten by perpetrators who included Ernst Burian, who was sentenced to life imprisonment by a People’s Court in June 1948 for his involvement in the massacres but was freed at the end of 1953. Burian was also involved in the killing of Lunz resident Rudolf Obendorfer in today’s WasserCluster building. On the afternoon of the 8th of May 1945, Obendorfer had gotten into an argument with the Hitler Youth district leader Josef Kracker-Semler and was subsequently murdered in the basement of the building the following night by unknown members of the Hitler Youth camp management. Kracker-Semler was sentenced to 20 years of imprisonment for having slandered Obendorfer and offended his dignity as a human being, among other charges, but was released on probation in August 1954. 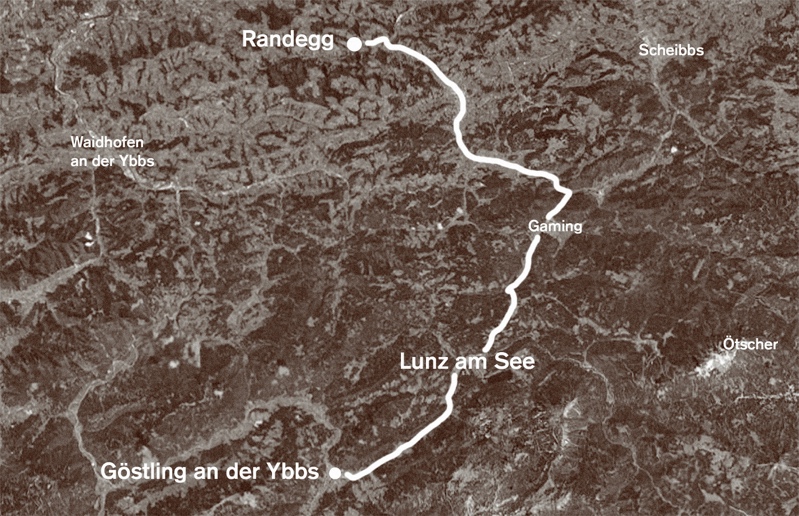 Map of the Lunz am See region, with Göstling on the Ybbs, Gresten and Randegg. In the last days of the Second World War, the district of Scheibbs was the scene of several massacres of Hungarian-Jewish forced laborers, some of whom were held in forced labor camps or driven on “death marches” toward the Mauthausen concentration camp. With the support of local Hitler Youth leaders from the towns of Göstling an der Ybbs, Gresten and Randegg, members of the Waffen-SS murdered around 200 people and killed Rudolf Obendorfer in the basement of today’s WasserCluster.

Johanna Zechner and Christian Rabl, with support from Hannes Kammerstätter